Bobby Patton thought he'd figured out a way to make a few bucks off a 1965 Chevelle. He'd punch out his own trim and VIN tag, throw in a 396 and some badges, and stick the car up on a popular online auction site for a quick $100,000. That's what he did, last April. Only problem: There's more to a Z16 than that, and the Z16 guys pay attention. 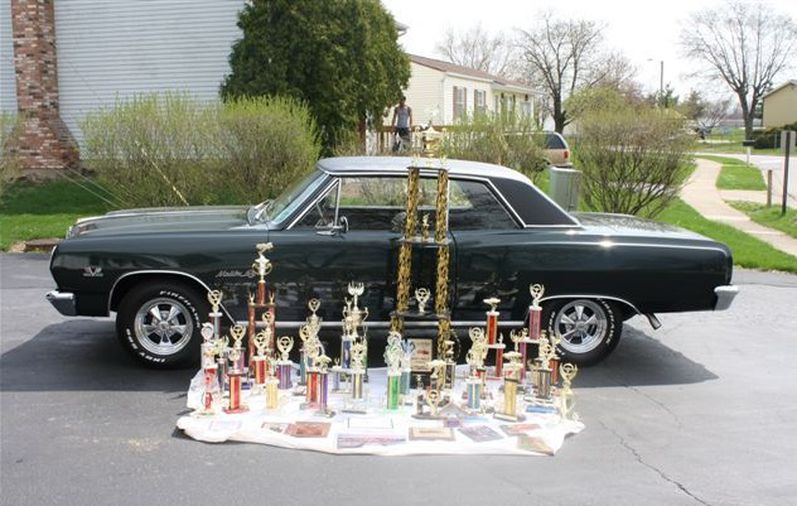 A thread on Chevelles.com quickly pointed out the problems with the car, starting with obvious issues such as the homemade VIN, with the incorrect codes and sequence within it. Jeff Helms, owner of the Z16 website and registry, soon contacted the owner (with great tact, I'd like to point out), and indicated some of the issues with the car:

Hi, Roger. Thanks for sending the pictures. Unfortunately, your car is not a Z16. Nor is the engine a Z16 engine. Nor is it # matching to the car.

The VIN tag and the cowl tag that you have are homemade tags, where someone cut out a flat piece of aluminum the shape of the tag, and stamped what they wanted on it. On real VIN and cowl tags, the characters are raised, not impressed into the tag. I will email you pictures of real Kansas tags in a moment.

Further, whoever made the fake cowl tag copied the body # of a real Z16 (14629) from a picture on my website!! You will see that body number on the picture I am about to send you. The body numbers were not reused; each Z16 has a different body #; so your car could not have body # 14629 even if it was a real Z16.

The rear trim on Z16's is totally different. Look at any of the pics on my website.

I sincerely hope you did not buy this car thinking it was a real Z16 and pay a real Z16 price for it. If you did, you need to hire a good lawyer and sue whomever sold it to you. You also need to go to Axxxx Motor Sales who performed your appraisal and demand your money back, because they obviously do not know what they are doing.

Sorry to be the bearer of bad news, if you did not already know all of this.

Thanks- Jeff Helms At that point, a smart person would have yanked the listing and taken the car apart before the state police came calling. But Patton instead jumped in on the Chevelles.com forum (as "Roger Workman") to defend his sinking ship and/or spread the blame:

Thanks everyone for your kind words. This vehicle was purchased from and titled in Carolina's from the previous owner. Purchased by my parents and currently it is titled and insured in State of Ohio. We are having the DMV do a title search and verification on the VIN of the vehicle. We are not vehicle experts and depend on reputatible apprasial companys to verify what we have been told. Apparently either the appraisal company has misguided us and many, many car collectors and lovers at the numerous car shows this vehicle has been to in and around Columbus area are wrong or it is indeed correctly a Z16. Since so many on here seem to be experts, what, if anything can I look for or provide documents to validate it?

In fact, with homemade tags, the car was unsaleable, and as tampering with them is a felony, the only possible way to rectify the situation would have been to remove them and have the (Ohio) state DMV issue new, correct ones. Those wouldn't have indicated it was a Z16, but it could have been a nice, $25,000 Malibu - one like the restoration photos he soon added showed.

Eventually, Patton wised up and after four days - four days of furious discussion among Z16 fans and numerous attempts to get him to come clean - closed the auction. Still, Patton continued to dig his hole deeper, and even sent the eternally patient Jeff Helms more photos to "prove" his car was a Z16. They didn't, as Helms wrote:

Your frame is a standard Chevelle coupe/sedan frame. It is not a Z16 frame. The side rails are open on the inside. Z16 frames are completely different. They are boxed in like convertible and El Camino frames.

Your front spindles and brake backing plates are the standard 10.5" units that came on all regular '65 Chevelles. They are not Z16 parts. The measurement is not of the backing plate or of the outside of the drum. It is measured across the brake shoe facing inside the drum.

I can't tell you anything about the rear axle from those pics. There should be a casting number on the center housing. There should also be a casting date on the center housing (a letter followed by two or three digits, in a format like K124). There should also be a stamp on the forward face of the passenger side axle tube (two letters, four digits, and then another letter, in a format like CA0123 B). Tell me what the #'s on it are, and I will tell you what it came out of.

Also note that your car does not appear to have a padded dash. All Z16's had padded dashes, which have numerous holes drilled in the top of the dash for the studs on the back of the pad to go through so it could be bolted on.

As far as your title goes, whoever faked that VIN tag must have run a bill of sale through NY or Alabama with the fake VIN on it, and got back a transferee bill of sale, which most title states would accept and give you a title for a few years ago without verifying the VIN  and that the tag is legit (but not so easily anymore). So you now have a title for a non-existent car; and you do not have a valid title for the car that you actually own with VIN 13?375A111581. In short, if you sell this car, you will have to do it without a title and identified as a "parts car," or else you may be committing state and federal crimes.

Sorry your parents were misled on their purchase. If the seller represented it to be a true Z16, then your parents should consult an attorney and take legal action against the seller, if the statute of limitations has not already expired.

Roger, there is simply not one single piece on your car that suggests that it could possibly be a Z16. By then, however, someone had contacted the Ohio State Highway Patrol, who were soon in touch with Jeff:

I answered all the officer's questions. He replied back a few days later that the prior owner of the car had been located and was contacted, and that he'd provided evidence that when he sold the car to the current owners it had 327 emblems on the front fenders, and the car was never claimed to be a Z16 when sold.

The jig was up. On June 27, 2011, a Franklin County Grand Jury indicted Buddy Bobby Patton, one count each of Tampering with Records; Possessing Criminal Tools; Telecommunications Fraud; and Attempted Criminal Simulation. He was looking at a possible eight years in jail. That didn't happen. He pleaded guilty and at his sentencing on April 10, 2012, he received two years probation for a first offense, which he has to serve in West Virginia (the home of "Roger Workman"). He also gets the impounded car back (!), once it gets a VIN installed and title issued.

For all of you out there thinking of cloning a car and trying to pass it off as the real thing, let this be a lesson: the authorities do indeed pay attention and bust fraudsters when they see 'em.

Have a code add/correction or site enhancement?  Know of a link that you think should be added?  How about feedback?  Click Here to contact us

Use VINmagic to decode your VIN

Copyright © 2023, - DataTagDecoder.Com does NOT offer vehicle authentication services or Vehicle Identification Number (VIN) decoder services. DataTagDecoder.Com does not guarantee 100% accuracy in information being presented. This data has been collected from GM and non-GM sources, both published and out of print references but has been checked for accuracy to the best of our ability Full Terms of Use and Privacy Policy LEGAL